Members of the Quad Videotape Group enjoyed food and conversation after Tuesday sessions or sightseeing at Isaac’s on Drayton  restaurant in downtown Savannah, GA.

Most of the group gathered in the flashscan8.us suite-Rm. 532 at the Marriott.  While there, they got a look at theflashstransfer Ted was prepping for the Thurs-Fri Vendor Cafe.

Quad Videotape Group members went to a different restaurant in Savannah just as it was closing, but talked their way in to a good meal.

Seated around a table like “Meet the Press,” they kept a close ear on Myron Lenenski playing Tim Russert with Pat Shevlin as the guest.

A Quad was present at the Vendor Cafe, shipped in from New York City.

As the song goes, “Something happened along the way…” causing DuArt Chief Engineer Maurice Schecter to spend several hours with tweaker in hand.

The Ampex VR-3000 portable did make a picture, but not to member Maurice’s satisfaction.

An Ampex playback processor was used, along with a digital TBC to recover an upstate New York NBC affiliate’s off-network recording of Billy Joel on Saturday Night Live.

This is an continuation of our ongoing lunches at NAB and Dinners at AMIA and in August, the first Dinner at SAA (The Society of American Archivists.) 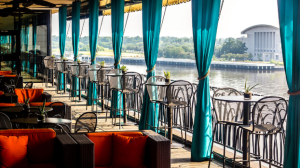 Look for the Quad Reel on a table to find us.

There are restaurants in the hotel, and nearby within easy walking distance as we found at AMIA 2008 in Savannah.

Please RSVP off-list so I know how many to plan for.

I’ll be on-site at the hotel  through Sunday, Oct. 12 and would be happy to see QuadList members over the course of the visit.

Preserving Tape, Equipment and the Knowledge to use them, in conjunction with the Library of Congress