It was 59 years ago November 30 that viewers of the dozen CBS Television Network Pacific Coast stations saw the first widely documented on-air use of Quad videotape for presentation of a regularly scheduled program: The playback of the CBS flagship news broadcast, “Douglas Edwards with the News” as recorded live off the transcontinental network line  from New York at 4:15 p.m. Pacific time, 7:15 p.m. in the East.
I say “widely documented” because this is the event Ampex promoted world-wide.
Whether there were other un-announced uses is likely known to only engineers and network officials who may have passed on without documenting those unannounced playbacks. (IE:  “Let’s briefly switch from the kinescope to the videotape to see what difference it makes in Seattle.”)
This delayed broadcast at 6:15 p.m. on November 30, 1956 originated from CBS Television City in Hollywood from one of the two handbuilt Ampex VRX-1000 Quad recorders supplied to CBS.  Both machines were recording the network feed from New York and while the Dec., 1956 edition of the “Ampex Playback” newsletter doesn’t say so, it’s likely that both machines were playing back their respective recordings as protection from a fault on the “On-Air” machine.
The on-air use followed the unveiling of Ampex’s “Mark IV” prototype at the National Association of Radio and Television Broadcasters (NARTB, now NAB) in April of 1956, and ushered in the beginning of “Time Zone Delay” for West Coast television broadcasts, and the development of other uses for videotape in production of programs.
Ampex reported orders for 80 machines representing $4-million, according to the April 18, 1956 Billboard magazine.
CBS and NBC were to be the first recipients of the Ampex VTRs as noted in this Billboard graphic accompanying the story: 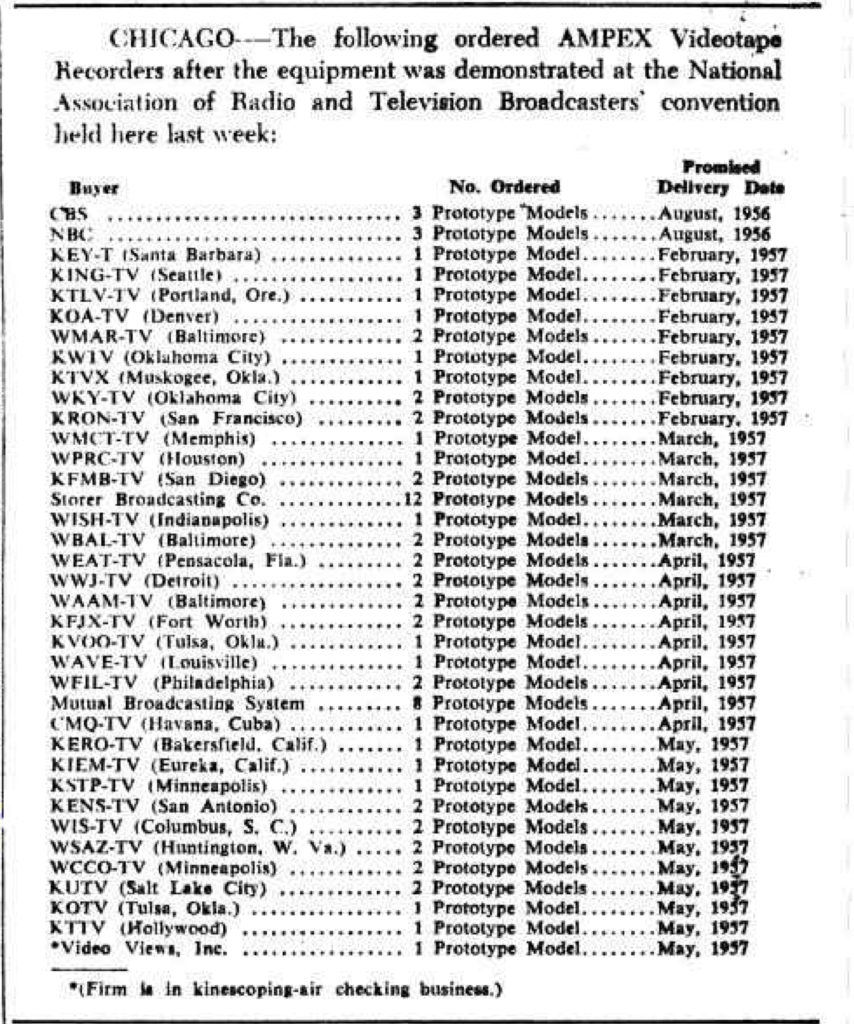 Preserving Tape, Equipment and the Knowledge to use them, in conjunction with the Library of Congress